It was the end of our time in Turkey and we decided we wanted to try a traditional Turkish bath, known in Turkey as a ‘Hamman’.

It had been 7 years since I had last been in Turkey; I didn’t join my friends on the day they went to a Turkish bath and although afterwards they insisted I would ‘have hated anyway’ I now decided I wanted to try the experience and challenge myself to do something I probably won’t be comfortable doing – I don’t really like being massaged and I hate being too hot and I especially hate pain. My only massage experience to date was a Cambodian massage in Siem Reap which consisted of a Cambodian lady painfully climbing over my back and spending about half an hour massaging my bum… So how bad can this one be? So since our feet hurt after trekking around Cappadocia, we decided to give it a go.

What is a Turkish Bath? 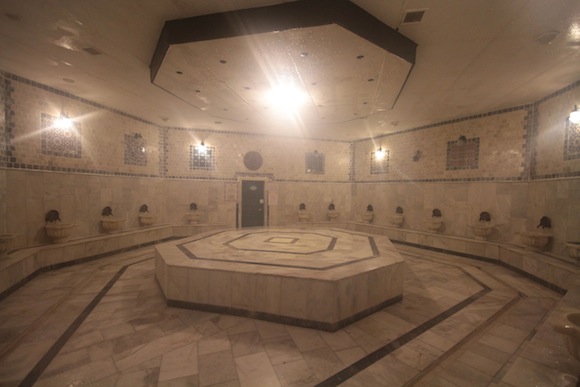 A Turkish bath, otherwise known as a ‘Hammam’ or ‘Hamam’ is not only a method of cleansing but also a place to socialise and relax. The process involves a period of time spent sitting in a very hot room, generally followed by washing/ exfoliating and a massage. Hammans are most commonly found in Turkey and Morocco and have been part of the culture for hundreds of years, they have also become increasingly popular with tourists to experience such an important part of the local culture. Hammans are closely related to ancient Roman bathing practises, with domed ceilings and a marble interior with large marble platforms at the centre that the customers lie on. Hammans are still a major part of Turkish culture today.

After a hot morning trekking in Cappadocia we asked our hotel to recommend us a Turkish bath. They suggested ‘Elis Haman’ which can be found in the centre of Goreme village. It cost us 75 Turkish lira per person for the full package which included a 10% discount voucher from the hotel.

Once we had paid we were then separated, which indicated this was a more traditional Hamman; Shaun went upstairs to the men’s bath and me down to the basement to the women’s bath. I was greeted by a lady who lead into a changing room. She asked me to undress, handed me a cloth to tie around me and some pink flip flops to wear (the marble is very slippery, definitely wear them!) she also handed me a rubber band which had my locker key on as well as a piece of plastic on it that said ‘peeling card’.

‘Lady sit’ she said pointing to a chair and indicated for me to remove my glasses. In my blurred vision she came towards me with something brown and slimy, it was a nice cold face mask and she put this all over my face and neck. She then lead me through to a sauna, where she pointed to a timer and said ’15 minutes, then shower’ and pointed through to another door. Then she left.

15 minutes!?! I thought, I’ve never managed more than 5 minutes in a sauna before. Just relax, I told myself. There was no one else around, and I relaxed and let myself sweat.

After the 15 minutes, I had a cold shower and then she called me into a big marble room with ‘Haman’ written above the entrance. The room was beautiful with a domed ceiling and filled with steamy air. She had layed out my cloth on a marble platform in the centre of the room ready and then said ‘lady, here’. I lay down on my back and she covered me with oil and then the painful bit began; she wore a Kese on her hand and began the ‘scrubbing’ process which involved peeling off the top layer of my skin as she scrubbed every inch of my body.

I closed my eyes but she said ‘lady look’ as she held my arm close to my face, so I could see my brown dead skin covering my arm. ‘Eww!’ I said, and we both laughed. She continued down to my legs, I had my eyes closed again but this time she took my hand and rubbed it over my leg so I had no choice but to feel my dead skin.

She asked me to roll onto my back. And at this point she removed my bikini  and unexpectedly pulled down my bikini bottoms.  After more scrubbing and exfoliating, the painful exfoliating bit was over. I don’t think the glove had been changed since the last people, I know that in some places you can bring your own/ buy your own new glove, but this didn’t really bother me too much.

She then got a bucket of water and poured it over me to remove the dead skin. The soapy wash was next,  in which she filled a bag which resembled a pillow case with soapy bubbles and then completely covered me almost a metre high in the bubbles! After this I received a slightly painful 15 minute massage in which she repeatedly told me ‘relax’.

At the end I sat on the side and she covered me in buckets of cool water again. I was then told ‘lady shower, swim’ and she pointed to the pool area.

The pool area was quite smelly, a bit mouldy and not chlorinated. Even without my glasses I could see bits of dead skin floating around. But as a keen swimmer I was thankful to have a swim and just kept my head out the water. This Hamman was certainly a ‘no frills’ establishment, but it certainly did have a traditional feel about it.

I was a bit confused about what happens next as she had left and without my glasses I couldn’t see further than a few metres. After an hour of realising she wasn’t going to come back and get me, I went back into the steamy room and found an exit. As i walked towards the changing rooms I heard a ‘Oh, lady’ in which she called me to lie down on a sun lounger, put a soft towel around me and she bought me some Apple Turkish Tea. The phone rang and it was reception upstairs to say my ‘friend was waiting upstairs’.Turns out that Shaun had been out almost an hour already, woops.

My thoughts on the experience

I did later notice however that most of my tan seemed to have been scrubbed off too! So I definitely recommend to try a Hamman at the start of a holiday not the end, if you want to keep your sun tan!

Hi, I'm Zoe. Welcome to Zo Around The World! I am a 27 year old budget backpacker with an obsession for travel and exploring new cultures.

Myself and my boyfriend Shaun have travelled to a total of 48 countries in 6 continents. In this blog you can read all about it, particularly how we manage to travel so cheaply.

Travel has become my favourite part of my life, let me show you how it can become yours too!