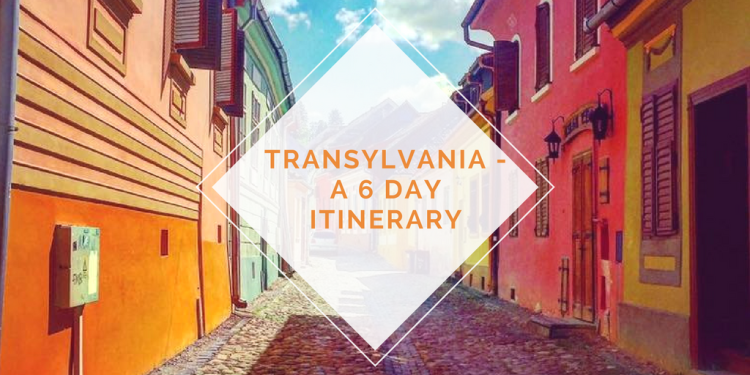 For months I’d been dreaming of being up in the mountains of Transylvania; medieval castles perched steep in the rocky mountain tops surrounded by misty clouds. Villages of cute little houses where people still ride on horse and carriage. Medieval towns with cobbled pebble streets, pointy church tops and colourful old houses with wooden shutters and eating plates of delicious meat and finally, being away from London and breathing in the fresh air.

Eventually, we found a big parking lot outside the lower ground floor, towards the back we found several mini buses and lots of men standing around smoking. Shaun shouted ‘Brasov?’ and expecting to be told a ridiculous price, we practically already said ‘no’ before they even had chance to respond with an actually very cheap ’44 lei’ (Approx £8).

It was all very official and he typed our names into a laptop on his front seat and printed us both off a ticket and receipt. The company we got the minibus with are called ‘CDI‘ and the minibuses to Brasov can be found from Bay C behind the parking lot.

While we waited for the bus to leave we stood around chatting to a girl from Brasov who had been working and living in Cyprus and was now heading home for a bit, she explained that the bus would take around 2.5 hours and go through the mountains and pretty villages. She also said that CDI are the best and cheapest bus company, so we were pleased with our luck of finding them, particularly as it saved us over an hour in time compared to if we had gone to the train station instead. We also noticed we were the only foreign tourists around.

After about an hour and a half into the journey I practically squealed out loud when I saw a family ride past on a horse and carriage. We drove through countryside, past cute traditional houses where ladies wearing traditional clothes and head scarves sat outside their homes selling watermelons and other fruit and veg. The bus then went higher into the forest filled mountains, through ski resort towns filled with wooden buildings built all up the mountain side which were closed for the summer. The bus stopped for one quick toilet stop during the journey, and we arrived at Brasov bang on schedule.

We bought our tickets for bus number 4 to the Old Town for 2 Lei per person (less than 50p each) and then checked into our guest house – Casa Terezia. It was lovely, basically a lady called Terezia’s apartment with a few rooms; her family in one room and the other few rooms for her guests. It cost $25 euro a night and this was one of the most expensive rooms of our trip, but Brasov isn’t that cheap a place and we wouldn’t have got much cheaper. Casa Terezia was worth every penny,  it was in the centre of town, spotlessly clean, Terezia was really helpful and we had a private bathroom and lots of free tea/coffee.

Terezia recommended us a local restaurant – ‘Sergiana’ which we decided we would head to that evening. We were not disappointed; it was all delicious (apart from the slightly strange fried pig fat and raw onion dish which everyone gets given as a starter) I also decided to try a traditional Romanian dish for my main meal – Sarmale (cabbage leaves stuffed with meat) with pork and Polenta (cornmeal). Shaun ordered pork ribs, the portion was huge and the best pork we had ever had. Both our meals (including alcoholic drinks) cost 70 lei in total (less than £12!) so cheap. 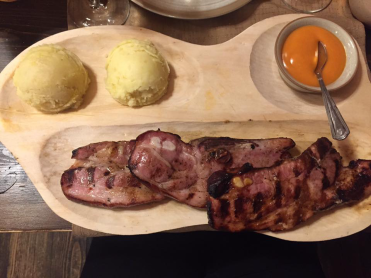 We fell in love with Brasov immediately. The food, the cheap alcohol (The wine and beer we had here were both less than £1; and the ‘small glass’ of ‘Roza’ wine I ordered kept coming in the size of a small jug!) The people were friendly and we also loved the slow and relaxed pace of life – particularly compared to London.

After dinner we spent the evening sat outside drinking and eating ice cream in the lovely old town, the town was full of beautiful buildings and when you look around you are surrounded by mountains. I had expected Brasov to be touristy, with it being one of the most popular places in Transylvania, but it wasn’t over touristy at all. 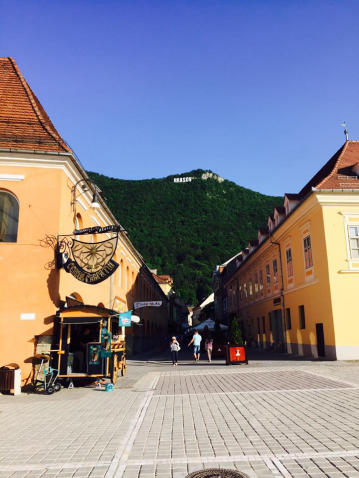 The next morning we decided to head up Mount Tampa (The cable car up and down cost 15 Lei each). We were totally squished in to the little old cable car, I noticed Shaun looked a little uneasy! Once we got up there, we were surprised (as it was only 10am) to see a little bar with dance music and a BBQ, we then walked for around 5-10 minutes and found the perfect spot for a view of Brasov…

In the afternoon we decided to head to Bran. With our map in hand and Terezia’s instructions to get 2 buses. Firstly, it was a short 10 minute bus ride to Autogara 2 (price- 2 lei) after this bus we were told we had 1 hour to wait for Bus Bran, we then found a bar/ restaurant where no one could speak English and the only thing we recognised on the whole menu was ‘cappuccino’, so we had no choice and ordered 2 of those. An hour later we were on ‘Bus Bran’ (price – 7 Lei) and it took about 45 minutes to get to Bran.

Bran, as I knew it would be, was a tourist trap. Everyone was here to see one thing – Dracula’s Castle. The creepy looking castle was perched high up the mountain and to get to the entrance we strolled past hundreds of stalls selling hundreds of expensive Dracula related items as we ate an expensive hot dog. The entrance to the castle cost 35 Lei (or 20 lei if you’re a student). It rained when we got up there and the inside was so packed full of tourists taking photos of absolutely everything it wasn’t long before we were on the bus back to Brasov. 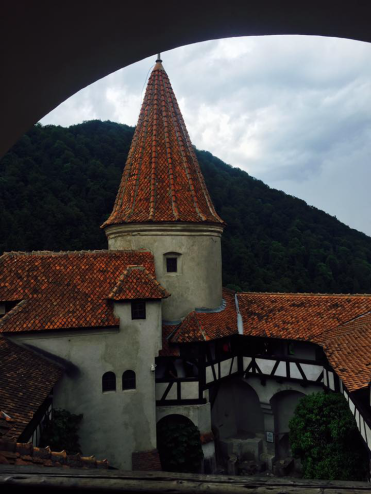 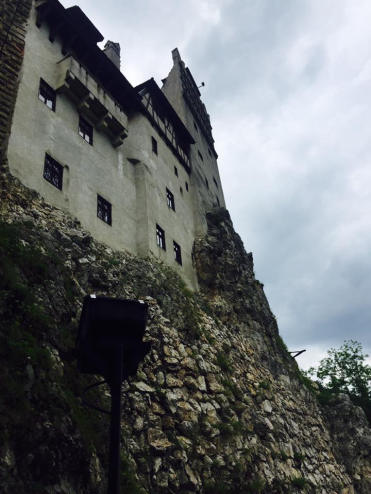 The next morning, it was time to say goodbye to Terezia and to Brasov. We got bus number 4 back into the city centre to the bus station -Autogara 1 (which is right next to the train station). We were pleased to see that CDI had a little office here, so for as little as 23 Lei each (£3.90) we booked ourselves on a little minibus to Sighisoara; a medieval town further north in Transylvania. 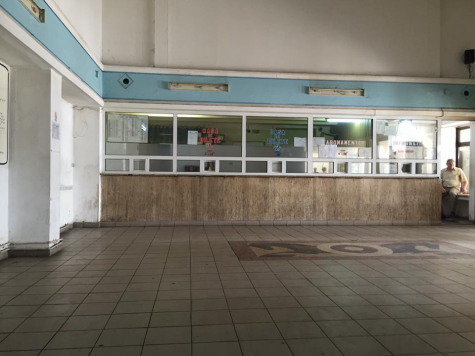 Inside the bus station

We waited for a bit on the mini bus, and it eventually filled up with locals heading to either Sighisoura or one of the villages on the way. It was another beautiful journey, although I did note that the scenery (now that the big snow topped mountains weren’t in view) wasn’t far off home to us – the Peak District in Derbyshire; except instead of cottages built of stone, county pubs and posh little villages here it was peasant villages, workers in the fields, lots of horses and carriages and the occasional old castle or fortress up on the hill tops. 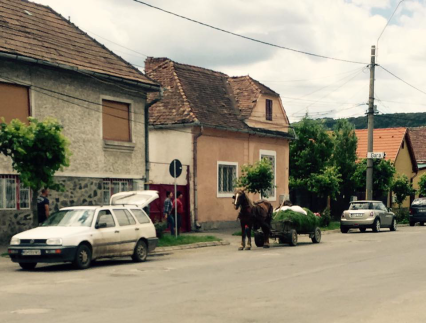 Top Tip – if you travel via bus to Sighisoara, get off on the bridge if your bus stops there!

We stayed on the bus until the bus station, it then took us about 45 minutes of wandering around until we found our guest house Casa Adalmo – it was another beautiful guest house, about 5-10 mins from the centre of town. It cost us £18 for the night.

Sighisoara is a small medieval town, it was a beautiful and colourful place to walk around however I couldn’t help feeling that the hoards of tour groups arriving on coaches cluttered the town up a bit. In the centre of the town Roma gypsy children would hover around the bars and restaurants, their hands out clasped together or pointing to their mouths, others had their heads in the bins searching for scraps of food.

For dinner we ate at the busy ‘Concordia’ restaurant where we shared a huge mixed grill and drank more cheap beer and wine. We ate the majority of it, but it wasn’t long before the children were peering down at us from the top of the wall behind us pointing to the leftover food on our table. We handed over the bread which was left in the basket, which they accepted and then pointed at the little scraps of beef and chicken left on our plate – I couldn’t not give it to them – so we put the scraps of meat on a napkin and handed it up to them, after which they shared it happily and then ran off. A local elderly man sat at the table opposite us smiled and nodded.

Transylvania quickly passed us by and we were soon on a train  headed for the capital – Bucharest. We bought our tickets at Sighisoara train station about an hour before the train left, the ticket cost 66 Lei each (Approx £11). The train left just after 2.00pm and arrived at Bucharest Gara Nord just before 07.30pm. 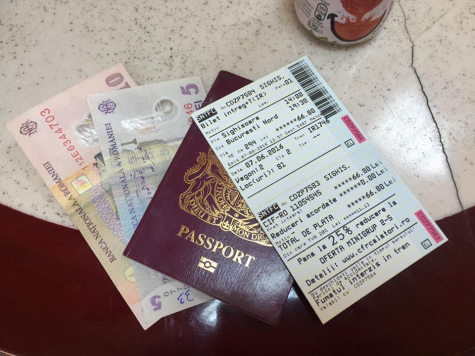 I had my head out the window for part of the journey, taking in the scenery, and feeling extremely pleased that we had included Romania in our itinerary.  The majority of Europe is now westernised and modern, but as I gazed out at shepherds herding their sheep, people working their bare hands in the farms, families living in small wooden traditional houses and riding on horse and carriage instead of by car, some people still wore traditional clothing and collected water out of wells and it was apparent that simple traditional ways in many of these villages was simply still the way of life, for so many in rural Romania.

12 thoughts on “Travels in Transylvania – A 6 Day Itinerary”

I am a 29 year old with an obsession for travel and exploring new cultures. Myself and my boyfriend Shaun have travelled to over 50 countries in 6 continents around the world.

Since 2013, we have left our home twice to travel around the world long-term together, on budget backpacking trips to many amazing places including South America, Asia, The Caucasus and Australasia.